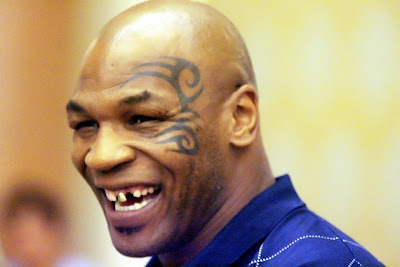 Mike Tyson's outlandish Zimmerman comments, Mike Tyson on George Zimmerman: ‘It’s a disgrace he hasn’t been shot yet’, Mike Tyson thinks that George Zimmerman deserves violent retribution for the shooting of Trayvon Martin. In an interview with Yahoo News about his upcoming one-man show in Las Vegas, the former heavyweight champion sounded off on the polarizing case:
"My personal feeling is that, as a young kid that was beat on by a bully, that was pretty much singled out—the guy [Zimmerman] stalked him, didn't follow instructions from a superior officer, when they said, 'Stop following the kid.' That tells you everything right there. But my all-around perspective, I wasn't there, I don't know what happened.
But it's just so widespread and overt what happened. Even though this is the best country in the world, certain laws in this country are a disgrace to a nation of savages. It's a majority versus a minority. That's the way God planned it. He didn't want to do something about it, He wanted us to do something about it. And if we don't, it's gonna stay this way.
We have to continue tweeting, we have to continue marching, we have to continue fighting for Trayvon Martin. If that's not the case, he was killed in vain, and we're just waiting for it to happen to our children. He'll have gotten away with impunity. It's a disgrace that man hasn't been dragged out of his house and tied to a car and taken away. That's the only kind of retribution that people like that understand.
It's a disgrace that man hasn't been shot yet. Forget about him being arrested--the fact that he hasn't been shot yet is a disgrace. That's how I feel personally about it."
In 1992, Tyson was convicted of raping Desiree Washington, a beauty pageant contestant, and served three years in prison.
via: yahoo
Posted by News Hump at 23:34