Brad Pitt as a 14-year-old hoopster

Brad Pitt as a 14-year-old hoopster 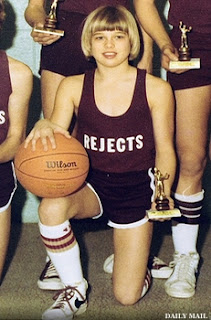 Brad Pitt as a 14-year-old hoopster, Brad Pitt Was A Basketball Reject, The actor didn't make his middle school basketball team, so he created a squad called the Rejects. We don't know many women who would say no to Hollywood's leading man, but sure enough, Brad Pitt faced lots of rejection in middle school. He literally wore it on his chest.
A snot-nosed 14-year-old who would grow up to become one of the world's most attractive men gave his Cherokee Middle School basketball team the nickname "Rejects." The Daily Mail reports Pitt helped organize the squad with friends after being cut from the eighth grade team in 1977.
Pitt clearly had a good sense of humor at a young age and had his father Bill coach the team. The six friends had special uniforms made with the word "Rejects" displayed prominently across the chest.
Tommy Lasorda's classic quote "play for the name on the front of your uniform and not the one on the back" wouldn't apply to this group of misfits.
Aaron Stull, a Rejects teammate and school age friend, tells the Daily Mail that the group was rewarded for its hard work. "His (Pitt's) dad coached us and we used to practice at one of the churches his family used to go to and play our games at the local Boy's Club. We even got a trophy, but sadly I can't remember what it was for."
Pitt didn't end up playing basketball at Kickapoo High School but was part of the tennis, golf, swimming and wrestling teams.
via: yahoo
Posted by News Hump at 13:09