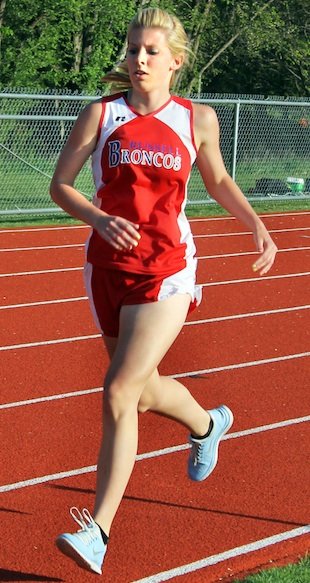 Teen runner disqualified for using tape, Kansas teen DQ’ed for running with tape over earrings; if uncovered would have been warned, Sprinter Miranda Clark actually increased her penalty by trying to do the right thing. On April 10, Miranda Clark was getting ready to line up for the start of the 1,600 meter race at the Ellsworth Invitational. The Russell (Kansas) High student was ready to roll when she noticed that she had in earrings, a result of a recent ear piercing. Knowing that wearing jewelry in a race is forbidden in sporting events by the Kansas High School Activities Association, Clark knew she couldn't run with her earrings showing, so she did what most athletes do to make jewelry less conspicuous: She covered them up with tape.
As it turns out, that decision was the worst she could have made. As soon as Clark finished the event, a track official, Jim Cross, approached her and asked what was under her tape. When she admitted that the tape was covering an earring, Cross promptly judged that she was exhibiting "unsportsmanlike conduct," a ruling that disqualified the Russell (Kansas) High runner from the entire meet; Clark was scheduled to run the 3,200 meters later in the afternoon.
Perhaps most infuriating for Cross and her teammates was this bizarre technicality: If Clark had left her earrings in but not covered them up with tape she would have only received a warning and not been disqualified. As such, by trying to do the right thing, the Russell running was punished more harshly than if she had openly disobeyed state regulations.
"The state should be encouraging runners, not making it difficult to participate," Clark, who finished the 1,600 meters in 10th place, told Prep Rally. "If KSHAA is insisting on being so picky with what is allowed to be worn at sporting events, they need to be consistent. I think it was completely unfair for me to be disqualified and rude to call me unsportsmanlike. I was definitely not trying to hide my jewelry. I was just trying to follow regulations the best I could."
Whether one agrees with the punishment that befell Clark or not, it's hard to argue with the line of logic she espouses: She didn't remove a piece of jewelry because she was protecting a recent piercing, so she tried to cover it up to keep from violating well-established state regulations. Yet instead of applauding her ingenuity, Clark was given a more harsh punishment for violating a virtually unknown technicality.
That's precisely the case that a member of the extended Clark family tried to make in an email to KHSAA assistant executive director Mark Lentz that was obtained by Prep Rally. In his response to an open query about Clark's dismissal from the meet, Lentz said that the teen should only have been disqualified if she had been warned about wearing the earrings earlier in the event. Lentz stressed the importance of "preventive refereeing"; warning athletes like Clark that they are at risk of a violation before they actually start an event.
Yet Lentz also failed to address whether the official's decision to ban Clark was right or wrong, and agreed that it should have been done on the basis of "unsportsmanlike conduct" because it was related to jewelry … even though Clark went out of make sure her jewelry was not showing.
For his part, Clark's father, Marty Clark, who was at the meet, said that he was most frustrated with a lack of consistency on what parts of contemporary uniforms the KHSAA deems to be inappropriate and unsportsmanlike.
"I have been attending track meets for years and there is not a meet that I attend that a person does not make a comment about the inappropriate uniforms that are allowed, but I have yet to hear a comment about tape on an ear or an athlete having an earring," Marty Clark told Prep Rally. "Miranda was wrong for having the jewelry in her ear and she knows that, but I feel that to be disqualified from competition because they are putting tape on it is a little extreme. This is just high school sports, we should be promoting and encouraging our young people to compete and be active, not discouraging."
via: yahoo
Posted by News Hump at 08:05