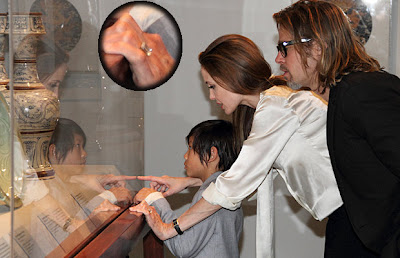 Brad Pitt and Angelina Jolie are Engaged, Angelina Jolie and Brad Pitt Are Engaged!, The actress steps out with an elaborate ring that Brad Pitt helped design. After seven years together and six children, it looks like Angelina Jolie and Brad Pitt are finally ready to take the plunge! Pitt's manager, Cynthia Pett-Dante confirmed the news to USA Today. "Yes, it's confirmed. It is a promise for the future and their kids are very happy. There's no date set at this time. Brad designed the ring."
Speculation around Brangelina's engagement started on Wednesday when Jolie was snapped sporting a blingy new piece of jewelry while attending an event at the Los Angeles County Museum of Art with Pitt and their son Pax. Turns out it was an engagement ring designed by the couple's jeweler friend Robert Procop, who has worked with Jolie and Pitt through the years and is behind the "Style of Jolie" jewelry line, which he sells on his website in cooperation with the Oscar-winning actress.
"I can confirm that, yes, Robert Procop did indeed design an engagement ring for Angelina Jolie, designed in collaboration with Brad Pitt," a rep for the jeweler told The Hollywood Reporter.
And the gem expert himself confirmed the news to the website — and shared details about the ring. "Brad had a specific vision for this ring, which he realized over a yearlong collaboration," Procop told THR. "He wanted every aspect of it to be perfect, so I was able to locate a diamond of the finest quality and cut it to an exact custom size and shape to suite Angelina's hand. Brad was always heavily involved, overseeing every aspect of the creative design evolution. The side diamonds are specially cut to encircle her finger. Each diamond is of the highest gem quality."
Jolie and Pitt met on the set of "Mr. and Mrs. Smith" when he was still married to Jennifer Aniston. Although they initially denied a romance, just months after Pitt and Aniston announced their divorce, he was photographed with Jolie and her son Maddox on a remote beach in Kenya. The Jolie-Pitts now have six children — three adopted, three biological — and have said that they would marry if it became something that was important to their offspring.
"The kids ask about marriage," Pitt told USA Today last year. "It's meaning more and more to them. So it's something we've got to look at." Jolie made similar statements regarding marriage, telling Nightline: "I think it would be hard to say no to the kids."
But picking a wedding date will be no easy task as Brangelina will have to plan around their busy schedule filled with humanitarian work and movie making. In fact, just yesterday there were reports that the couple, who hasn't worked together since "Smith," will be partnering up for a new movie, "The Counselor."
via: yahoo
Posted by News Hump at 13:22