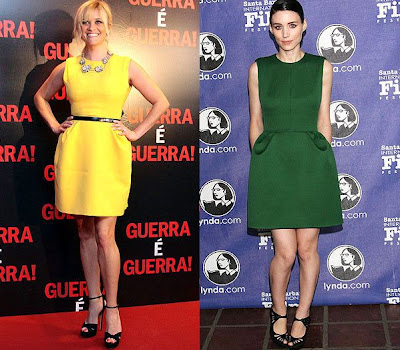 Reese Witherspoon upstaged in dress, Reese Witherspoon vs. Rooney Mara — Fashion Faceoff, The star overaccessorizes a look worn with more understated style by a buzzy young actress. "This Mean War" is the title of Reese Witherspoon's latest movie, but it could also describe the message she recently sent to actress Rooney Mara. The two hit the red carpet in the same chic, retro-shaped sleeveless dress just five weeks apart. "The Girl With the Dragon Tattoo's" Lisbeth Salander isn't one to back away from a fight, so this fashion battle is on! And it's up to us to decide just who wore it best.
Reese, 36, donned the dress in sunny yellow for the "This Means War" premiere in Rio de Janeiro on March 8. The Oscar winner added a statement necklace, belt, Jimmy Choo sandals, and a ponytail.
Oscar nominee Rooney, 26, slipped on the frock for the Santa Barbara International Film Festival on February 3. She accessorized simply with Giambattista Valli heels and pulled her hair back in a low ponytail.
This is tough as the dress is flirty and flattering on both ladies! Both women also chose the design in a color that really compliments their hair and fabulous footwear, so this comes down to the details. Reese earns bonus points for making her look more polished by belting the garment, but she loses points for having too much going on in the accessories department. Does she really need a belt, a statement necklace, and a ponytail? Meanwhile, Rooney could use a belt to make her look less plain, but I applaud her understated hairstyle and her minimalistic approach. So I say Rooney's the winner, although I have a feeling a lot of people are going to disagree.
via: yahoo
Posted by News Hump at 11:13