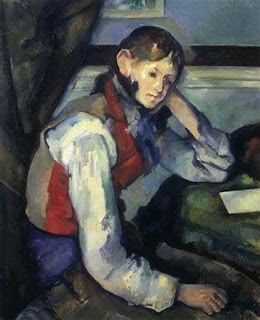 Missing $109 Million Masterpiece Found, Serbia says finds Cezanne missing masterpiece worth $109m, A work nabbed at gunpoint in one of the world's biggest art heists has finally been recovered, police say. Police in Serbia believe they have recovered an Impressionist masterpiece by Paul Cezanne worth at least $109 million that was stolen at gunpoint in one of the world's biggest art heists four years ago, a police official said on Thursday.
"We believe the painting is Cezanne's Boy in a Red Waistcoat and three suspects were detained in connection with that," the official, who asked not to be named, told Reuters.
"Experts in Serbia and abroad are trying to ascertain whether the painting is an original. This painting is worth tens of millions of euros," the official added.
The canvas - Boy in a Red Waistcoat - was one of four paintings stolen from a Swiss art gallery in 2008 by a trio of masked robbers who burst in just before closing time and told staff to lay on the floor while they took what they wanted.
The paintings were reportedly worth an estimated $163 million at the time and the heist was the biggest art theft in Swiss history and one of the largest in the world. The Boy in a Red Waistcoat canvas was worth $110 million alone at the time.
The painting was stolen in 2008 from the Emil Georg Buehrle gallery in Zurich, a private collection founded by a World War Two arms dealer and entrepreneur. The gallery could not be reached for comment on Thursday.
Two of the stolen canvasses, one by Claude Monet and the other by Vincent Van Gogh, were recovered days later abandoned in a car, but the other two - the Cezanne and a painting by Edgar Degas, have been missing for the last four years.
Cezanne's Boy in a Red Waistcoat is thought to have been painted around 1888 and depicts a boy in traditional Italian dress donning a red waistcoat, a blue handkerchief and a blue belt. Three other versions of the painting are in museums in the United States.
Last October, the Serbian police recovered two paintings by Pablo Picasso - Tête de Cheval (Horse's Head) and Verre et Pichet (Glass and Pitcher) - stolen in 2008 from a gallery in the Swiss town of Pfaeffikon, near Zurich.
The police official said law enforcement agencies from several countries had cooperated in the latest investigation that led to the apparent recovery of the Cezanne masterpiece.
Serbia's state prosecutor is expected to issue a statement or give a press briefing on the case later on Thursday.
via: yahoo
Posted by News Hump at 13:27