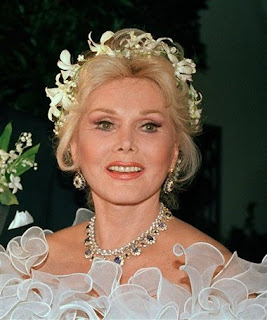 Zsa Zsa Gabor's Daughter Files for Conservatorship, Zsa Zsa Gabor's only daughter asked a judge on Tuesday to place her mother in a conservatorship that will independently control the ailing glamor queen's medical care and financial needs. Constance Francesca Hilton claims Gabor's husband, Frederic von Anhalt, has been isolating her 95-year-old mother and leaving her heavily sedated. She also questioned whether her mother's finances are being properly handled by von Anhalt.
"By isolating me from my mother, not only does her current husband deprive her of my love and companionship, but he goes against estate planning documents that appear to reflect her wishes that he not be in sole control of her affairs," Hilton wrote in a declaration accompanying her petition.
Hilton is asking the court to appoint her as Gabor's conservator, although her attorney, Kenneth Kossoff, said they would be willing to have an independent third party handle all oversight duties.
Hilton and von Anhalt have squabbled for years over Gabor's care. Von Anhalt blasted Hilton in a phone interview, saying his wife is comfortable and that he cares for her every night.
"It's probably her last card she's playing now," he said of Hilton. "It's all about money. She's afraid, her mother passing away eventually, and there's nothing."
A news release issued before the filing stated that Hilton has been waiting for a year for financial and medical information about her mother that husband von Anhalt has refused to disclose.
Von Anhalt said he is acting in his wife's best interest and is forced to sell her Bel Air mansion to cover his wife's debts and medical bills. He said expenses amount to around $30,000 a month, even though Gabor's monthly income is only $6,000.
The first hearing on the matter was scheduled for May 2 before Superior Court Judge Reva Goetz, who also oversees the conservatorship of Britney Spears.
Gabor, a Hungarian-born sexpot of the 1950s and 1960s, has been in declining health and didn't make an appearance at a February birthday party hosted at her mansion.
via: oregonlive
Posted by News Hump at 09:46