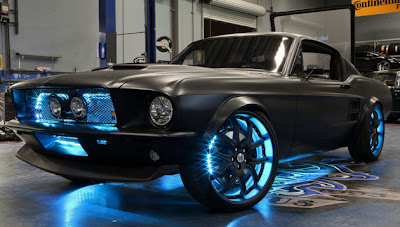 What a 'Microsoft Mustang' would look like, Microsoft Mustang: How cars would look if the software giant ran Detroit, The car features a Web-connected heads-up display and Xbox Live gaming for passengers. The software giant loads a Ford Mustang with its consumer technology as a showcase for what developers can do with on its platform.  Microsoft Mustang 2012 Pics.
SEE More Pics of  Microsoft Mustang 2012 by Clicking Here: Buzzpixs
Tricking out a car with Windows sounds, well, sort of lame on its face. But suppose it came with a heads-up display that let passengers play Call of Duty against their buddies?
Or cameras around the car that let you use your smartphones to check out who might be eyeballing your ride? Or turning that phone into a microphone you could use to ask -- nicely, of course -- lookie loos to step away from the car?
That's what the folks at West Coast Customs, working with developer evangelists at Microsoft, have put together for their television program, Inside West Coast Customs, which airs on Discovery's Velocity Network this Sunday at 9 p.m PT/ET. The idea, dubbed Project Detroit by Microsoft, was to create a car that showcases some of the cool things developers can do with Windows, Windows Phone, Windows Azure, Xbox 360, Kinect, and Bing.
"We believe coding should be fun," said Jeff Sandquist, senior director of developer relations at Microsoft, who worked with West Coast Customs on the project. "We're about developer evangelism and telling developers what they can do with the Microsoft platform."
The car is a vehicle for that. West Coast Customs took a 2012 Ford Mustang and retrofitted it with a 1967 Mustang fastback replica body. They painted the car matte black, and decked it out with neon blue lights in the grill and around the rims.
Then they baked in just about every Microsoft consumer technology they could. The car is Web connected, giving the driver the ability to glance at the heads-up display to check the weather forecast or find the nearest gas station. The heads-up display on the passenger side, which the driver can't see, lets passengers play games over Xbox Live with their friends.
What's more, when parked, the rear windshield can flip up, turning into a projector screen for playing movies or video games from behind the car. The rear windshield also has a customizable display, giving those in the car the ability to flash custom messages to tailgaters and others.
"So you could say, 'Excuse me, you're following me too close,'" Sandquist said. Or, perhaps, something a little more profane.
The touch-screen dashboard displays run the Windows 8 beta, called the consumer preview. The driver can swipe the screen to toggle between different dashboard skins that includes one that resembles the dash of a 1967 Mustang, as well as one that features the 2012 Mustang look and one that borrows the tile-based look of the new Windows 8 interface, dubbed Metro.
West Coast Customs also put the Kinect motion-sensing controllers in the front and rear of the car. Drivers can use the cameras to check out a live video and audio feed of the car's surroundings using their Windows Phone. And if someone gets too close, the driver can tap into the external audio system with a smartphone to tell an onlooker to buzz off.
Using Viper SmartStart app for Windows Phone, drivers can locate the car, as well as unlock it and start it remotely.
Sandquist declined to disclose how much the car cost to create, except to say the tab was roughly what it might cost to create a collector car at a custom fabrication shop.
"This was not some ridiculous mission to Mars project," Sandquist said.
He said all of the technology used is off the shelf. Microsoft didn't create any specific hardware to make the technology work.
"This is achievable," Sandquist said. "This is not science fiction."
After the show airs Sunday, Microsoft will post the group's programming code. And it will go into more detail about how developers can create their own car applications on its Channel 9 developer Web site. As for the car, Microsoft will take it on the road to some of its trade shows. The first one: TechEd North America in Orlando this June.
via: yahoo
Posted by News Hump at 10:53