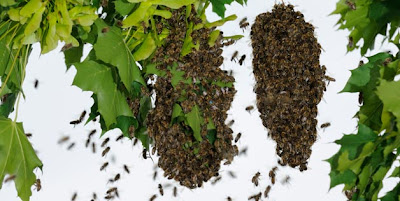 Swarm of bees invades SF Giants dugout, Swarm of bees delays spring training MLB game, Last year, the San Francisco Giants suggested that parents discuss the birds and the bees with their kids at the ballpark. The bees apparently aren't into the idea. A massive swarm of 'em came over the right center field wall Sunday and headed right into the Giants' dugout, delaying the matchup with the Arizona Diamondbacks for 41 minutes. D'Back center fielder, Chris Young, immediately ran for cover -- inspiring first baseman Paul Goldschmidt to do the same. "I was trying to get away as fast as I could without looking too scared," Goldschmidt said.
In a less threatening turn of events, lemonade and cotton candy were used to get the bees away from the dugout and fans.
Posted by News Hump at 13:02