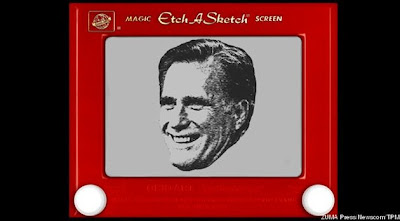 'Etch A Sketch' comment draws ridicule, Romney campaign reiterates ‘reset button’ line, opponents pounce, Rick Santorum's campaign believes Mitt Romney will pander to moderate voters in the general election. 'Etch A Sketch' oops for Romney? Mitt Romney has said for weeks that his campaign will be able to hit a "reset button" if he receives the party's nomination, but his opponents pounced on the idea Wednesday when a campaign spokesman reiterated the theme, saying the general election "is like an Etch A Sketch, we shake it up and start all over again."
When asked during an interview on CNN if the conservative positions Romney has taken during the Republican primary season "would hurt him with moderate voters in the general election," campaign spokesman Eric Fehrnstrom suggested Romney would receive a fresh start against President Barack Obama.
"Well, I think you hit a reset button for the fall campaign," Fehrnstrom said. "Everything changes. It's almost like an Etch A Sketch. You can kind of shake it up and restart all of over again."
Romney's chief Republican rival, Rick Santorum, seized on Fehrnstrom's comments, accusing Romney of planning to pander to moderate audiences in the general election.
"We all knew Mitt Romney didn't have any core convictions, but we appreciate his staff going on national television to affirm that point for anyone who had any doubts," Santorum spokesman Hogan Gidley said in a statement. "With the two-year anniversary of the signing of ObamaCare upon us, can voters really believe that the man who urged the president to use his healthcare plan in Massachusetts as a model would really repeal ObamaCare? Or is that promise just something they would 'shake up and restart' with when Romney hits the general election?"
The comments come the day after Romney won another major primary state with a victory in Illinois, further increasing his lead against Santorum.
via: yahoo
Posted by News Hump at 15:47