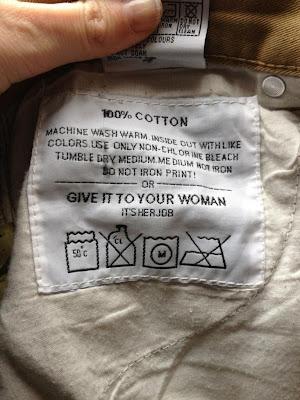 Sexist jeans in the UK offend women everywhere, Sexist jeans in the UK spark outrage, Boys, do your own laundry, Washing machine instructions on a pair of pants give offensive advice to women. We are not amused. Jeans sold at the UK store Madhouse made headlines this week after British journalist Emma Barnett picked up her boyfriend's jeans while tidying the house.
On the washing-instructions tag, she read "machine wash warm." Under that was the washing advice that would quickly set off a Twitter firestorm:
"OR — GIVE IT TO YOUR WOMAN, IT'S HER JOB."
Yep. She did what any good journalist would do: she took a photo of the tag, tweeted it, then wrote about it in The Telegraph.
And then CNN picked up the story:
"If the comment had been remotely funny, I would have been the first to laugh and shrug it off, as it really wouldn't have bothered me enough to photograph it, tweet it and then write about it," Barnett wrote in The Telegraph. "But it was the lack of any implied humor and the horrible surprise of such an incongruous message hidden away inside some trousers, that left me just plain stunned."
Twitter responses ranged from disgust to amusement.
The Cut called out the attempt to be funny as "embarrassingly outdated":
"There's also the question of how single dudes should deal with cleaning the pants — because, after all, living in a cave does get dirty," Alex Rees writes.
Madhouse took to Twitter to apologize, claiming the jeans were manufactured by a brand they stock and that they were unaware of the offending tag:
"There was never any intention to offend it is obvious that we need to be a lot more careful when proofing sold goods," Madhouse posted. "If we had noticed the label the items would never of been put in our stores. A mistake was made and we apologize for this."
Neither Barnett nor Madhouse named the brand.
What do you think? Are the jeans funny or offensive?
Note: This story wouldn't have made international news if Barnett's boyfriend had picked up his clothes off the floor. Maybe it's time we expect more domestic prowess from our significant others. Men, do your own laundry.
via: yahoo
Posted by News Hump at 09:30