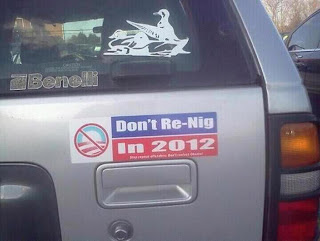 Seller defends racist Obama bumper sticker, “Don’t Re-Nig” purveyor Paula Smith says bumper sticker isn’t racist, Last Friday, I wrote about the racist, anti-Obama "Don't Re-Nig in 2012" bumper sticker that has been making the rounds across social media circles. While people were questioning the authenticity of the photograph showing the bumper sticker on someone's car, we were able to track down a website selling the sticker along with several other controversial items.
Writing for Forbes, Roger Friedman interviews the site's owner, Paula Smith. Ms. Smith, who hails from Hinesville, Georgia, insists that neither she nor the sticker are racist. Who knows what Smith really believes, but her logic is a stretch, to put it gently.
"I do find it amazing and entertaining that one of our stickers has become a racist thing," Ms. Smith told Forbes.
She even tried arguing that the dictionary does not define the "N-Word" as racist. Wisely, Friedman posted the actual definition from dictionary.com, which says the word, "is now probably the most offensive word in English. Its degree of offensiveness has increased markedly in recent years, although it has been used in a derogatory manner since at least the Revolutionary War. Definitions 1a, 1b, and 2 represent meanings that are deeply disparaging and are used when the speaker deliberately wishes to cause great offense."
Her protestations aside, Ms. Smith appears to have removed the bumper sticker from her site. Under the "Anti-Obama" section of the site (advertised as her No. 3 bestseller), you'll now only find a sticker reading, "I was Anti-Obama Before It Was Cool."
In what may be a reference to the controversy her other bumper sticker has caused, the description below reads, "Show the world how you feel! (but be careful, you may hurt someone's feelings)."
Ms. Smith then goes on to argue that President Obama is "not even black," but rather, "a mixture of race." When Friedman asks Smith if she thinks the N-Word is offensive or derogatory, she says no, but then claims that she herself does not even use the word.
"I have kids here around me that are black kids. I call them my own kids. I've helped black families…to guide them in the right direction," Smith told Forbes. "We like to laugh and have a good time. That's our way of life."
via: yahoo
Posted by News Hump at 09:07