Olympians warned not to shake hands

Olympians warned not to shake hands 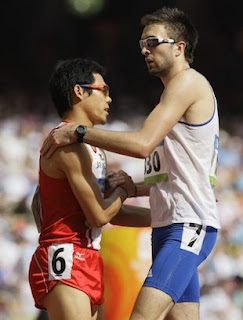 Olympians warned not to shake hands, British athletes warned not to shake hands at London Olympics, You may not see British athletes at the 2012 Games engaging in a common act of sportsmanship. Faster, stronger, higher ... cleaner? The British Olympic Association has warned its athletes not to shake hands with other athletes, visitors and dignitaries during the upcoming Summer Olympics due to fears of spreading illnesses. It is feared that sickness could affect the British medal count.
"The greatest threat to performance is illness and possibly injury," BOA chief medical officer Ian McCurdie told British reporters. "We are talking about minimising risk of illness. It is all about hand hygiene."
Oh, you cheeky Brits, it's cute that you think the reason you won't be winning medals will be because of infectious disease. (Joking. Great Britain was fourth overall with 47 medals at the last Olympics and figures to improve on that total in 2012.)
The BOA later backed off from the severity of the statement, tweeting that athletes should use common sense. Common sense and hand sanitizer.
How is thing going to work, exactly? What is a British runner supposed to be if a foreign counterpart offers a congratulatory handshake? Smother herself in Purell before accepting? When a British diver wins a medal, how does he accept it from the elderly gentleman handing it to him? With a celebratory chest bump?
Is it cool to wear gloves during events, thus avoiding post-event hand-to-hand contact? All these questions really should have been covered in the etiquette guide.
Shoot, it's a good thing protocol dictates that subjects bow to the Queen rather than shake hands. It could have been a little awkward for athletes to fist bump her during the Opening Ceremony.
via: yahoo
Posted by News Hump at 12:34