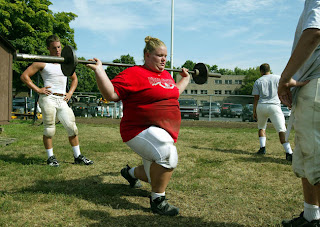 NFL player's incredibly strong sister, Nick Mangold’s sister makes Olympic weightlifting team, Nick Mangold's sibling, Holley, clinches an Olympic berth by lifting more than her brother weighs. The New York Jets' Nick Mangold may be one of the league's best centers, but he has competition to be the best athlete in his family. Nick's sister Holley made the U.S. Olympic Weightlifting team at Arnold Classic in Columbus, Ohio, on Sunday.
Mangold made the switch from football to weightlifting after high school. Like her brother, Holley played on the offensive line. The expectation was she would make the team in 2016. Instead, her 145-kg (319.67-lb) clean and jerk clinched a spot in the 2012 Olympics.
"I came up really quickly,'' Holley Mangold said. ''I've never even been to a World Championship. I knew I had really great competitors I was going against."
Nick's listed weight is 307 lbs, so Holley lifted more more than her brother to get to the Olympics.
In June, Holley appeared on MTV's "True Life: I'm a Big Girl." She competes in the super heavyweight division, and talked about how her size helps her lift.
"A lot of people have a skewed view of large people in America," said the 5-foot-8 Mangold. "Everyone constantly thinks I'm overweight or out of shape but I train twice a day and six days a week. I'm doing this for my sport."
Unfortunately, Nick won't likely be able to make the trip to London to see his compete. Holley will lift on Aug. 3, right around when the Jets will have to report to training camp.
via: yahoo
Posted by News Hump at 07:02