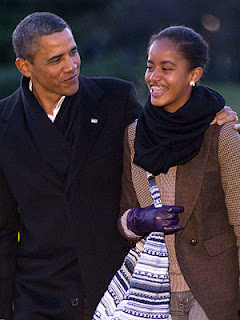 Malia Obama safe after earthquake in Mexico, Malia Obama is "safe," the White House says, even though the first daughter was in Mexico Tuesday when a 7.6 earthquake hit near her. The young Obama is in Oaxaca, which shares a border with Guerrero. The quake struck near Acapulco in the state of Guerrero. Malia, 13, accompanied by Secret Service agents, has been in southwestern Mexico for a school-sponsored service project. The U.S. Geological Survey said the earthquake was felt strongly in Oaxaca, reports AP.
But Kristina Schake, the first lady's communications director, said Tuesday afternoon that Malia "is safe and was never in danger."
The White House asked media not to report on Malia's trip, because she was not with her parents, and made an exception to comment only because of the quake. But that hasn't stopped paparazzi from getting some candid shots.
Meanwhile, The Oval reports that Republican candidate Rick Santorum criticized President Obama for allowing his daughter to travel to Mexico at a time that the State Department has issued travel warnings about the country.
via: usatoday
Posted by News Hump at 08:48