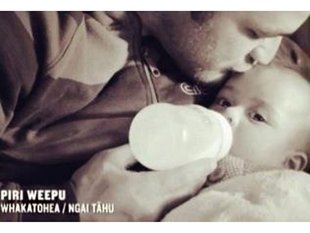 Image of father feeding son sparks controversy, See the Controversial Photo of a Dad Bottle-Feeding His Baby -- Does This Image Bother You?, Outrage over a New Zealand rugby star's photo was enough for the government to step in and remove it from an ad. Breastfeeding activists in New Zealand raised so much of a stink over an ad featuring a dad bottle-feeding his baby that the New Zealand government actually decided to edit the image above out of the ad.
While the government's decision could be viewed as a victory for La Leche League, which protested the ad, some observers have concluded that the decision is a sad day for dads. If a father is going to be involved in the feeding of his new baby, it's only going to happen through a bottle. Even in many families where the baby is drinking breast milk exclusively, Mom is often pumping milk to allow others -- including Dad -- to feed the baby breast milk through a bottle. So, to state the obvious: An ad showing a dad bottle-feeding a baby doesn't mean that the child isn't drinking breast milk. (We won't get into the fact that parents should be allowed to make feeding choices without being judged.)
The New Zealand case was even more peculiar because the ad was actually part of an anti-smoking campaign. (Watch the ad below.) It had nothing to do with the breast versus bottle debate. But La Leche League still didn't approve of the bottle-feeding image it appeared to promote. The ad features New Zealand rugby player, Piri Weepu, playing with his adorable children -- a six-month-old and a toddler -- while in the voice-over he talks about why he won't ever smoke.
New Zealand Health Ministry’s chief adviser, Pat Tuohy, told the New Zealand Herald that the fall-out has been rough on Piri Weepu. "Piri by all accounts is a great dad and a terrific guy," Tuohy said. "Probably of all of the people who've been damaged he's probably had the hardest time in all this because he's just been doing what any Dad would do in his situation."
via: yahoo
Posted by News Hump at 05:17