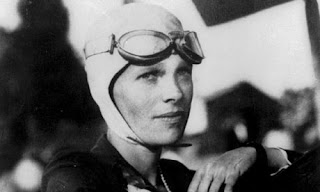 Amelia Earhart mystery takes new turn, Amelia Earhart Mystery: Photo Launches Renewed Discovery Effort, A photo taken months after the famous aviator vanished may hold a crucial clue to her fate. A renewed effort to determine what happened to aviator Amelia Earhart's plane when it disappeared over the Pacific 75 years ago is expected to be announced today as a recently discovered photo taken months after she vanished is believed to show her plane's landing gear.
The privately funded half-million dollar effort, which is anticipated to begin in July, is expected to be announced by a historical group and the U.S. government.
Analysis of a photo uncovered in 2010 of a plane wreck off the Kiribati islands has led specialists to believe there is a "possibility" that the wheel in the grainy photo could be from the airplane the Electra, the plane Earhart flew, a senior State Department official said late Monday night.
The official added that it was enough to warrant exploration but "a very healthy dose of skepticism must be in play."
"We're not making any bets," the official said, adding that Earhart's disappearance remains one of the world's greatest unsolved mysteries. "It's not what you find, but what you're searching for."
The actual picture is not expected to be unveiled until the event and presentation set to take place this morning, which will be attended by Secretary of State Hillary Clinton, famed undersea explorer Dr. Robert Ballard and the foreign minister of Kirabati. All three are expected to speak at the event in Washington, D.C.
The "event will underscore America's spirit of adventure and courage, as embodied by Amelia Earhart, and our commitment to seizing new opportunities for cooperation with Pacific neighbors founded on the United States' long history of engagement in the Asia-Pacific region," the State Department said in a statement.
The International Group for Historic Aircraft Recovery, also known as Tighar www.tighar.org, which works on the Kiribati islands, has launched a mission to try and search the area where the picture was taken, and use sophisticated Sonar capabilities to see what might be there.
The State Department and Tighar are also working with undersea explorer Ballard, of Titanic fame, on the project.
The search will focus on the remote Pacific atoll called Nikumaroro, which is approximately half way between Australia and Hawaii, according to the Wall Street Journal.
The deserted island of Nikumaroro, which lies 1,800 miles south of Hawaii, was in the line of Earhart's flight path as she flew from New Guinea to Howland Island in July of 1937, when she and navigator Fred Noonan might have gone down during an attempted around-the-world flight.
Tighar champions the theory that the Elektra ended up on the uninhabited Gardner Island, where Amelia landed safely on the island's fringing reef, but after a week of distress calls, rising tides and surf swept the Electra over the reef edge. The group believes that Earhart and Noonan lived for a time as castaways and that the aviator died in a makeshift campsite on the island.
Researchers at Tighar also uncovered a mirror from a woman's compact, buttons and a zipper from a flight jacket during their $500,000 expedition in 2007. All of the found items are American-made and from the 1930s, and all were part of Earhart's inventory.
via: yahoo
Posted by News Hump at 08:32