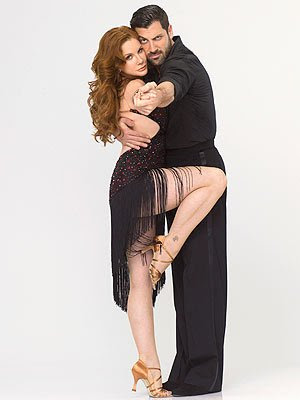 Actress Melissa Gilbert rushed to hospital during 'Dancing', Melissa Gilbert Rushed to the Hospital After Hitting Her Head During 'DWTS', Melissa Gilbert suffers whiplash and a mild concussion after hitting her head while performing. Melissa Gilbert is the latest contestant to fall victim to the "Dancing With the Stars" curse.
Former "Little House on the Prairie Star" Gilbert was rushed to the hospital during the broadcast of Monday night's "DWTS," after hitting her head on the dance floor during her Paso Doble performance with partner Maksim Chmerkovskiy, the actress' representative told TheWrap. Following the bump to her head, Gilbert complained of dizziness.
Gilbert tweeted later, noting that she's "alright," though she had sustained a mild concussion and whiplash during the incident.
"I'm alright," Gilbert wrote. "Mild concussion and whiplash. Very soon I will be safely home resting and being taken care of."
Even before the injury, Gilbert, 47, complained that it had been a particularly grueling effort preparing for the performance. In a Monday blog post she wrote for People magazine -- titled "This Week Has Been a Killer" -- Gilbert groused: "Bruises are not sexy. Neither are burns, cuts, scrapes, sore muscles and calloused feet ... I have a burn on my ankle from being dragged across the floor by Maks. It will scar. No question. The scar is mine. I earned it by working really hard."
Gilbert joins a long list of "Dancing With the Stars" contestants who've succumbed to the physical strains of performing on the show. Last year, Kym Johnson was sent to the hospital after suffering injuries while rehearsing with partner Hines Ward. And "Jackass" star Steve-O -- whose previous feats of physical daredevilry include stapling his scrotum to his leg and attaching a leech to his eyes -- had to see multiple specialists after landing on his mic pack while doing a flip during a rehearsal.
via: yahoo
Posted by News Hump at 06:38