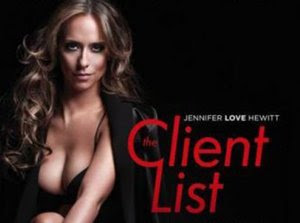 Jennifer Love Hewitt’s fears of stripping down, Jennifer Love Hewitt Bares (Almost) All for Lifetime's 'The Client List', Jennifer Love Hewitt says the provocative “Client List” scenes took some getting used to. "I think that it’s sexier not to show everything. I feel that people’s imaginations can do way more." That's Jennifer Love Hewitt, talking about her provocative new Lifetime drama, "The Client List." Well, somebody should've told the marketing department that, because the ads for the show -- you know, the ones that show Hewitt lounging around in a skimpy bra and panties -- seem to show just about everything. So how much is too much?
The show does air on basic cable, after all, so Hewitt won't have to show everything -- and she says she wouldn't have taken the role if she had to. "I wouldn’t have done nudity, no. That’s not something that I feel particularly comfortable with." But even keeping (some of) her clothes on, Hewitt still experienced some first-day jitters. "It was a little nerve-wracking the first day, for sure," she says of shooting scenes at the infamous day spa where her character, struggling Texas mom Riley Parks, turns to prostitution to help support her family. "Even though we’re actors, the guys are strangers to me at the time. I’m sort of there in lingerie and everything, so it does take a couple of takes to sort of feel comfortable with it."
"List," you may remember, started out as a TV movie that aired back in 2010, and the experience left Hewitt and the rest of the cast wanting more. "We had sort of joked around when we were doing the movie about how fun it would be to sort of turn this into a series and really get in deeper with the lives of the women in the spa." And indeed, the series is less about what Hewitt coyly refers to as the "happy endings part" and more of a workplace dramedy about a tight-knit group of women who happen to perform certain acts behind closed doors.
This isn't Hewitt's first time at the TV rodeo, of course. She started out as Bailey's girlfriend Sarah on Fox's '90s drama "Party of Five" and is fresh off a five-season run as medium Melinda Gordon on CBS's "Ghost Whisperer." And being from Texas herself, the role of Riley feels like something of a homecoming. "I’ve gotten to go back to my original accent, which has been really fun for me," she explains. "But it’s hard to drop now sometimes when I go home. So I talk goofy, and my friends are like, 'What are you doing?'"
TV veteran Cybill Shepherd ("Moonlighting," "Cybill") co-stars as Riley's feisty mom, Linette, and Hewitt is clearly thrilled to be working with her. "She lights the set. All the lighting that you see on the series is pretty much just Cybill being in the room. I love her to pieces." Plus, after Riley's husband ditches her in the pilot, an illicit romance starts brewing between Riley and her hunky brother-in-law, Evan (Colin Egglesfield, "Rizzoli & Isles"). "Riley’s life is going to be turned upside down, and the brother is there to hold her hand through it, and so that’s going to bring up some complications and some interesting storylines." (And some pretty steamy make-out scenes, we might add.)
The star is well aware that her new project may raise some eyebrows, but she dismisses any criticism that "List" portrays all massage therapists as being one step removed from prostitution. "I don’t think anybody that’s watching is expecting me to teach the logistics of giving a proper massage. … I played a medium on 'Ghost Whisperer' for five years, and the mediums never complained about the fact that I had cleavage while I was crossing people over into the light." (We don't think anyone complained about that, actually.)
Hewitt's not only the star of "The Client List," she's an executive producer as well and does poke her head into the writers' room from time to time. ("Probably more than the writers like," she admits.) And she's stepping into the director's chair, too: Hewitt says she's slated to helm the "List" season finale. All of which makes for some pretty long hours. So how does a TV star unwind after an exhausting day of shooting? "I watch 'The Voice' and 'American Idol,' and I sit in my Brookstone foot massager." Sounds like a pretty happy ending to us.
via: yahoo
Posted by News Hump at 00:19