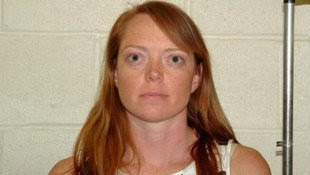 Slow-dance dispute leads to wedding brawl, Worst Wedding Guest Ever: Attacks Bride, Slow Dances with Groom, Leaves in Cop Car, The trouble started when an attendee allegedly kept dancing "inappropriately" with the groom. My best friend just celebrated her second anniversary and I still haven't gotten her a wedding present. I am the worst, or so I thought until I read this morning's headline: "Drunk Ohio Woman Brooke Burke Arrested: Slow Dances With Groom, Assaults Bride and Officer"

If you ever feel guilty about a forgotten wedding gift, remind yourself of the tale of Brooke Burke, the worst wedding guest ever. According to a ABC News, the Ohio wedding guest's antics were so bad she left the reception in handcuffs.
It all started when Brooke allegedly refused to stop slow dancing "inappropriately" with the groom. When the bride cut in, Brooke protested a little too much, according to a police report. Screaming, and attempts to swing at the bride, ensued. The argument whipped, like a wedding tornado through the reception. A pregnant guest was reportedly pushed by Brooke in the melee. Belligerent screams from the guest from hell became so loud, they caught the attention of a nearby off-duty cop named Dan Kuack. He claims he heard Brooke arguing with two men who'd taken her car keys from her preventing her from driving.
So the torrentially intoxicated Brooke waited for a cab in the reception hall, only to end up starting another fight with the bride. Brooke had to be restrained by guests. Kuack arrived on the scene and tried to intervene, but she allegedly attacked him too.
According to the police report, she was "kicking and screaming and being belligerent" and later "struck [Kuack] in the face several times." That's when backup was called in. Cue police sirens and flashing red lights invading the once picturesque reception hall. In lieu of party favors, guests were encouraged to give statements to the police about the incident.
Brooke was charged with assault and intoxicated disorderly conduct. By her own admission, it was all booze's fault. Next week she's expected to explain her actions before a judge, who might be far more lenient than the bride. Let this be a warning to all future brides who feel slighted by their bridesmaid's lack of enthusiasm for planning shower games and buying hideous dresses: it could be so much worse.
via: yahoo
Posted by News Hump at 14:21