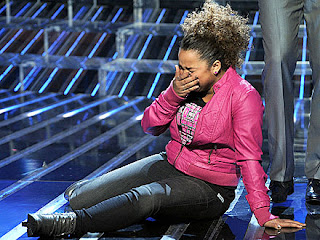 Rachel Crow: Stop blaming Scherzinger for my 'X Factor' elimination, After her shocking elimination on Thursday's episode of The X Factor, a heartbroken Rachel Crow began to sob while the crowd booed judge Nicole Scherzinger, whose indecisiveness ultimately led to Crow's axing by viewer vote. "I am not feeling the greatest, but I will be fine," the 13-year-old singer told reporters after the show. "I have definitely felt way better than this."
Crow, who had been one of the show's frontrunners, said she ran into a tearful Scherzinger backstage after the results were announced.
"She told me that she was sorry," Crow said. "I don't know why she said that, but I saw her in her dressing room and ... I told her it was okay and not her fault."
She also issued a plea to her supporters who have voiced their disappointment in the form of boos, hateful messages on social media networks and comments on websites.
"I want to say to all those people, 'Stop, Please,' " Crow told PEOPLE. "[Scherzinger] is the nicest person and the most beautiful person inside and out. ... She is amazing, and I don't understand why people are taking it out on her. It's no one's fault. It's not even America's fault. It's no one person's fault. It's just what God had in store for me. And I will be okay."
Crow's support for Scherzinger also extended to her Twitter feed.
"Please don't be angry with @nicolesherzy she was put in such a tough position," she wrote late Thursday.
As for Simon Cowell, Crow said the best piece of advice she received from her mentor was "to be myself."
A humble Crow said she was fully supportive of the other finalists, especially Marcus Canty, the other half of Thursday's bottom two. "Marcus is an amazing person," she said. "When I met him, I knew that he had a spark. He definitely has the X factor."
Crow said Canty embraced her as she broke down after the results were announced, and told her he was expecting to be the one sent home.
"I was crying and he was trying to console me," she said. "I was like, 'Console me? You should be celebrating.' I told him to celebrate and be happy."
And while she said she'd still like to pursue a future in show business, Crow said she won't miss the pressure of being a contestant on The X Factor.
"I am honestly a little relieved that I am out," she admitted. "It's definitely a lot of pressure, and while I am very sad, I am fine."
via: people
Posted by News Hump at 08:25