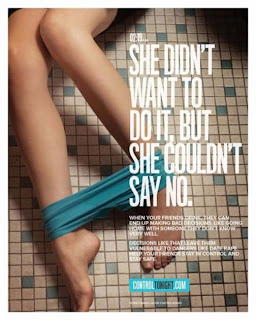 Pa. liquor board pulls ad on heavy drinking, rape - Provocative ad yanked after backlash. A campaign meant to warn young adults about the dangers of rape got the message all wrong, critics say. An ad meant to warn young adults about the links between heavy drinking and rape has been pulled by Pennsylvania's Liquor Control Board. Critics said it was another example of suggesting victims are to blame for rape.
The ad featured an image of a woman's legs on a bathroom floor with her underwear pulled down to her ankles, and the words: "She didn't want to do it, but she couldn't say no."
Stacey Witalec, a spokeswoman for the Liquor Control Board, said the online ad was part of a broader campaign that began a few months ago on the website ControlTonight.com. She said there was both criticism and support for the ad, but the board decided to pull it Wednesday evening.
Witalec said the campaign was trying to bring attention to a serious problem, not suggest rape victims are to blame.
"On an annual basis more than 97,000 people between the ages of 18 and 24 are the victims of alcohol-fueled sexual assaults," Witalec said, "and those statistics are staggering."
One expert defended the ad.
Jennifer Storm, Executive Director of the Victim/Witness Assistance Program in Harrisburg, noted that one sequence in the interactive ad stated very clearly that rape isn't the victim's fault.
"I feel strongly that we need to be having very frank conversations about prevention. Otherwise, all we're doing is intervening after the fact," Storm said.
"Alcohol is the number one drug used to facilitate rape. You lose your capacity to make sound decisions," Storm said, adding that "we need to empower people with every tool and piece of knowledge we have."
One blogger on the website Jezebel didn't agree.
"Rape is not just a bad thing that happens to someone after drinking too much," wrote Erin Gloria Ryan. "It's a deliberate act on the part of the rapist, a violation of another person committed solely because the rapist wanted to rape. The sooner we acknowledge this, the sooner we'll be rid of stupid, finger wagging ads like these."
Ryan also said that the portion of the ad reading "See what could happen when your friends drink too much" was "just shifting blame away from the rapist and onto the victim and, oddly, the victim's friends."
Several other ads in the campaign warning about the dangers of heavy drinking are still being used. Those subjects include excessive drinking and alcohol poisoning, drunk driving, and drunken arguments.
via: yahoo
Posted by News Hump at 22:40